This smart and substantial Dual Chamber Hibachi Konro Japanese Grill combines all the benefits of the traditional grills, with modern styling and an attractive price. The dual chambers offer the added advantage of being able to cook at different temperatures at the same time (or just using one side - saving on charcoal). Extremely efficient and economical for home or professional use. Receive a free 10kg box of Sumi Bincho Charcoal worth £25.00, just add below.

In stock
Skip to the end of the images gallery 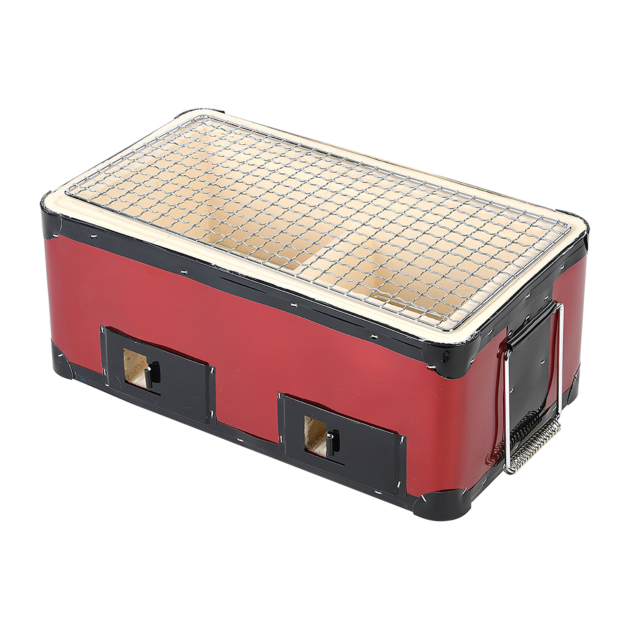 These barbecues are made from diatomaceous earth which is a soft siliceous sedimentary rock of natural origin that is very friable and therefore can be easily crumbled into a fine white to off-white powder.

Diatomaceous earth is made from the fossilised remains of tiny aquatic organisms called diatoms. Their skeletons are made of a natural substance called silica.

Over a long period of time, diatoms have accumulated in the sediments of rivers, streams, lakes and oceans. Diatomaceous earth, in Japan, is predominantly worked throughout the city of Suzu. This mouldable earth has long been used as heat insulator like stoves.

Diatomaceous earth is porous, allowing high thermal insulation. In addition, it enjoys siliceous resistance to fire (heat resistance is good). Diatomaceous earth reddens with fire and picks up infrared rays. Cooking with Binchotan charcoal in this type of barbecue will bring out the ingredient’s umami to the maximum.

Diatomaceous earth barbecues are made of insulating bricks that have been heated to 1000°C. This improves durability, thermal insulation and resistance to weathering and frost and humidity. The mechanical strength of galvanised steel is enhanced, which minimises heat leakage.

Since expansion and contraction due to heat are absorbed at the joint surface, the reinforcement of metal fittings is done effectively.

Diatomaceous earth barbecues, Konro, have one or more doors on their side. These openings protect against heat and prevent their diffusion all around. Diatomaceous earth accentuates infrared rays when cooking on the barbecue and this positively influences meat tenderness.

Due to the nature of the material this item is made from, they are not designed to be submerged in water, get wet or be left outside. Doing so will invalidate the warranty.

Sousvidetools.com will only be held liable for damaged goods when signed for as ‘received damaged’. All damages and/or short delivery must be notified within 1 working day (please sign for all goods unexamined). Off loading – the buyer will be deemed responsible for providing facilities for off-loading delivery vehicles.

This product has no reviews yet.